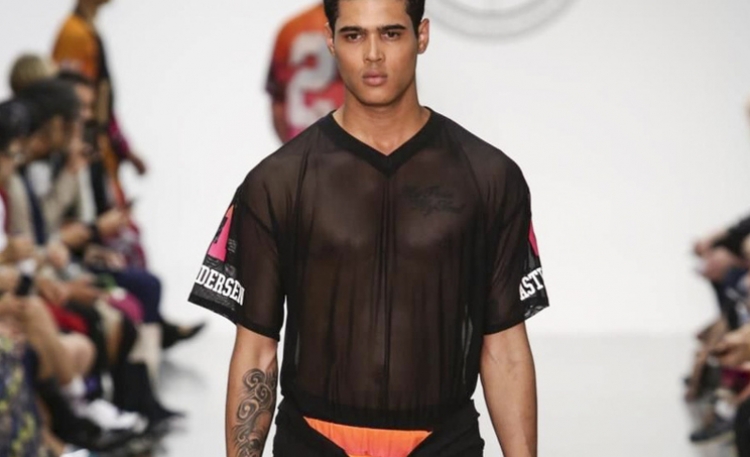 June sees the launch of the Astrid Andersen for Topman collaboration. The 17 piece collection is full of big and bold luxe streetwear and is everything you’d hope for and expect from the Copenhagen-based Danish designer. Astrid has previously progressed through 3 seasons of the Topman and Fashion East joint initiative ‘MAN’ and is about to embark on her 3rd season of the Topman sponsored British Fashion Council’s ‘NewGen Men’ program as part of London Collections: Men.

Gordon Richardson, Topman Creative Director ‘Working with a designer with such total unrelenting focus on her design aesthetic as Astrid has resulted in a breath taking range of energetic luxury sportswear pieces. With no detail left unturned this collection is a truly original collection of modern wardrobe collectables.’

Astrid explains about the collaboration, ‘I make sport-inspired casual wear with a luxurious feel. For Topman, I’m creating a small collab collection that I’m super excited about. It’s almost like doing a diffusion line where you want to draw a more commercial line from the brand without losing the signature. I want it to be very clean and sleek but at the same time push some materials and techniques that will be unconventional for Topman to use in their menswear selection.’

Astrid describes the inspiration for the collection as ‘The inspiration for the design was a website I found on Punjab basket teams from India. There were images from the early fifties right up to today so the inspiration became the crossover references on how this was originally a national sport but as time progressed it became highly Americanised. The colour code and metal reflect the traditional Indian use of colours but in a tight palette. ‘

The collection was shot on A$AP Ferg in New York as Astrid is a big fan of Ferg’s and vice versa. ‘I’m a product of the hip-hop culture has become so mainstream that it pierces through everyone’s perception. I was very happy to see Ferg in the collection, it looks good on him and he brings the energy and vibes to the capsule that I had envisioned. On set he was amazing, totally turning the heat up on this project and he help create an end result that I’m very proud of and I value that beyond words.’

‘As a designer, I really found myself while listening to this kind of music, so of course it influences my work. My first boyfriend introduced me to the Wu-Tang Clan and everything they were about and this influenced most of my twenties. Now, I listen to a lot of music, but I still return and revisit the same classics from my teens – this season we played Missy Elliott’s Hot Boys at the show but remixed it with A$AP Ferg’s Murda Something. Last year, so much amazing music was released, albums that you obsess about, like Drake’s album, Kanye’s Yeezus and A$AP Ferg’s Trap Lord. The energy from this music inspires me.’