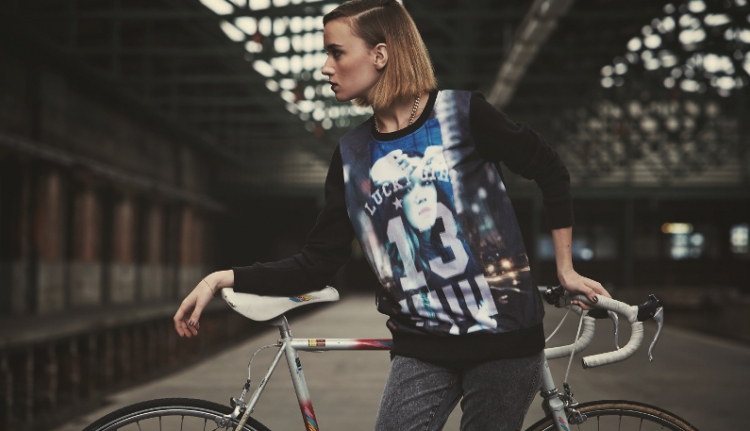 Iza Lach, a 25-year-old singer, composer and producer from Lodz, is often referred to as the Polish Lilly Allen. She became known in 2012 as a winner of a competition for a remix of a Snoop Dogg song. The Californian rapper liked her version of “Set It Off” so much that he decided to produce Iza’s whole album “Off the Wire”, which was made available free of charge through the BandCamp.com service in the same year.

By then Iza was already known to the general public through her MySpace profile (hence the comparisons to Lilly Allen). She recorded her first album in 2008, so apart from the Snoop Dogg number she has made two albums and is still recording. The special collection signed with her name is accompanied by Iza’s new song “Undecided”.

“Beautiful Disaster” is a dynamic mix of hip-hop, sport and rock embroidered with shiny elements. “The main colours of this collection are white and black set against red and silver, whereas the clothes are a patchwork mix of textures and patterns”.
Among the hits of this particular collection are oversize sports t-shirts, decorated with sequins, rock style imitation leather trousers, variations on baseball jackets presented as long coats with shiny sleeves, and marbled denim jackets and shirts. The creators of the collection have also taken care of appropriate accessories such as knitted beanies, backpacks and quilted leather sports high-tops.

The “Beautiful Disaster”, Iza Lach for CROPP collection, will be available in the salons across Poland this September.